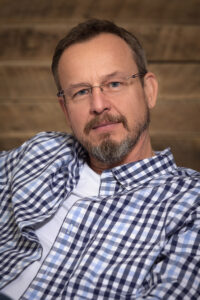 Nashville-based visual artist Randy L. Purcell has always been inventive. Even in childhood, Randy let his imagination roam when he would play with materials found on the construction sites where his father worked, or later when he built whimsical pieces of furniture with his dad’s help.

But Randy’s compulsion to create was something he didn’t know how to satisfy. And, as it turned out, it wasn’t until later in life that he followed his dreams. In the interim, the Paducah, KY native worked in construction, at a uranium enrichment plant, as a deckhand on a tugboat, as a delivery driver, in retail, and as a volunteer fireman. Randy also served in the Army Reserve when his unit was activated for Operation: Desert Storm.

In 2000, he relocated to Nashville to pursue a different career path. The physical and mental stress of his previous jobs made him want to do something totally different, and at the age of 37, he enrolled at MTSU to study art. At the time, Randy wanted to start his own business to make one-of-a-kind pieces of weird or eccentric furniture. During his studies, he learned the different techniques of Encaustic art; a painting method usually involving beeswax mixed with damar resin and colored pigments. One technique included the transferring of ink onto the beeswax. This was something he got excited about.

His first assignment working in encaustics gave Randy that same creative spark he enjoyed in his youth. He could sense that there was so much he could do with this medium. First, he transferred small images from magazines, related to farm life, on top of barnwood coated with beeswax. As he explored the process, he found that he loved the way that the ink was translucent on top of the beeswax. He saw that the beeswax gave a yellow patina to the image, and the way the wood showed through gave it more of an aged appearance.

Still, Randy felt that he wanted to work on larger pieces, and so he played with transferring ink in smaller pieces to build up the images. The magazine pages he used created additional hues and textures. He found a way to collage the transfer of the different pieces of magazine into a new composition. The text and images from the magazine reminded him of how the brain processes information. Coupled with the patina given to the images, Randy saw his art as the replication of nostalgic memory or a living thought with fluid, emotional value.

This association between art itself and the way people perceive images would become an ongoing theme of Randy’s work.

In 2009, Randy graduated from MTSU with his BFA in both painting and sculpture. It was following his graduation that he began his career as a professional artist. Exhibitions of his artwork included showcases for the 2010 ArtPrize competition (the largest international art competition in the U.S.), the 2019 ArtFields regional art competition for artists in the Southeast, and a multi-piece art installation at Honeytree Meadery. He was accepted to participated in the Memphis-based, “The Art of Science” showcase that helps researchers visually explain what their work means to the scientific process.

In addition to painting, he also works in a few other media. He has created murals in locations like the 2012 Donelson “In Concert” community mural located at what would become the hot chicken restaurant Party Fowl, and the MTSU Veterans Center. Randy’s early interest in making furniture led to the creation of pieces of functional artwork as well, including the Metro Arts Nashville “Bee-Cycle” bicycle rack and the ReTune Nashville effort to repurpose damaged musical instruments equipment.

His work has appeared in fine art galleries, schools, restaurants, and in private collections all over the United States and Canada. Randy’s work has been received with praise locally and beyond, including a feature on Tennessee Crossroads, showings at USN’s Artclectic, Harding Academy, and the downtown Nashville art crawls. Randy is frequently asked to demonstrate his process for educational institutions, including his alma mater, MTSU.

Randy is also an active member of the Middle Tennessee arts community. He’s both a Co-founder of the Nashville Collage Collective and a member of the collective’s prestigious inner-organization “Four Corners,” both of which promote collage- making in the area. Randy is a member of Four Artist TN, a group of artists with mutual interests and complementary aesthetics that are exhibited in group shows. He currently serves on two boards, Southern art publication Number, Inc., and a recycling-based arts organization, Turnip Green Creative Reuse.

Randy is an advocate of both sustainable use and bee populations. After he discovered unfiltered beeswax made his transfer process better, he started purchasing beeswax directly from local beekeepers. Though his pieces vary greatly in focus and style, bees are a frequent subject of his art.

Randy lives in Mt. Juliet, TN with his wife Tracy, and their dog Jagger.

Stay in the Loop

Join my newsletter for updates and deals on my paintings!
Close