In 2004, I was pondering a new career. Burned out as a result of a stressful management role, I quit that job and went back to working construction for a while. That work quickly took a toll on my body and  caused me carpal tunnel in both wrists. After having my operation in 2005, my wife Tracy recommended I go to college and pursue a new occupation

I wasn’t sure what my new career direction would be. I knew that I enjoyed building things, and I was painting as a hobby. After much consideration, I decided to enroll at Middle Tennessee State University (MTSU) to learn how I could create my own furniture line. However, during my time at MTSU I became much more interested in fine art. I gradually came to realize that being a visual artist was my true calling. With this new understanding, I focused my studies on painting and sculpture and received my BFA in 2009.

2010 was when Nashville had its 100 year flood.  I got involved with a group of artists called “ReTune Nashville.” We took flood damaged instruments and created artwork that would later be auctioned to raise money for Music Cares.

I had also submitted the sculpture “The Stand Off” to Artprize,” an open, international art competition that takes place annually in Grand Rapids, Michigan.

Because of the prestige of this competition, I reached out to a number of venues to participate in the competition. After several rejections, my work was accepted into the Grand Rapids Public Museum for exhibition.

Around this same time, I was still experimenting with encaustic methods I learned at MTSU. By encaustic method, I mean a type of artwork that involves using beeswax. In my case, I am transferring the ink from magazines onto the beeswax. It is no exaggeration to say that I had fallen in love with this process because of the look given to art pieces by the color and textures made from the beeswax. The amber tint produced by this method created a sense of warmth and nostalgia, almost as if the images were the concrete manifestation of a pleasant memory. 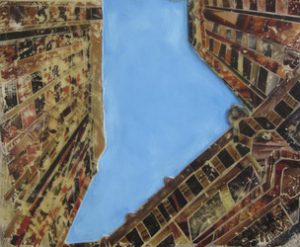 After creating my first series using the encaustic transfer process—a series depicting some of Chicago’s architecture entitled “Looking Up”—I knew that I had found a medium by which I could express my creative voice.

At this juncture, I was new to the Donelson-Hermitage area and just starting out as an artist. Despite my relative inexperience, I knew that I wanted to be involved in the community. I always felt building relationships with my neighbors would both help those in the community and me. Fortunately, around this time, Matt Fischer, the owner Picture This Creative Framing & Gallery introduced me to members of what is now the leadership program “L’Evate,” a networking and business development program. This was a true godsend for my career as an artist as L’Evate consists of business owners, personnel in the nonprofit space, members of local government, and just about anyone else I needed to meet. 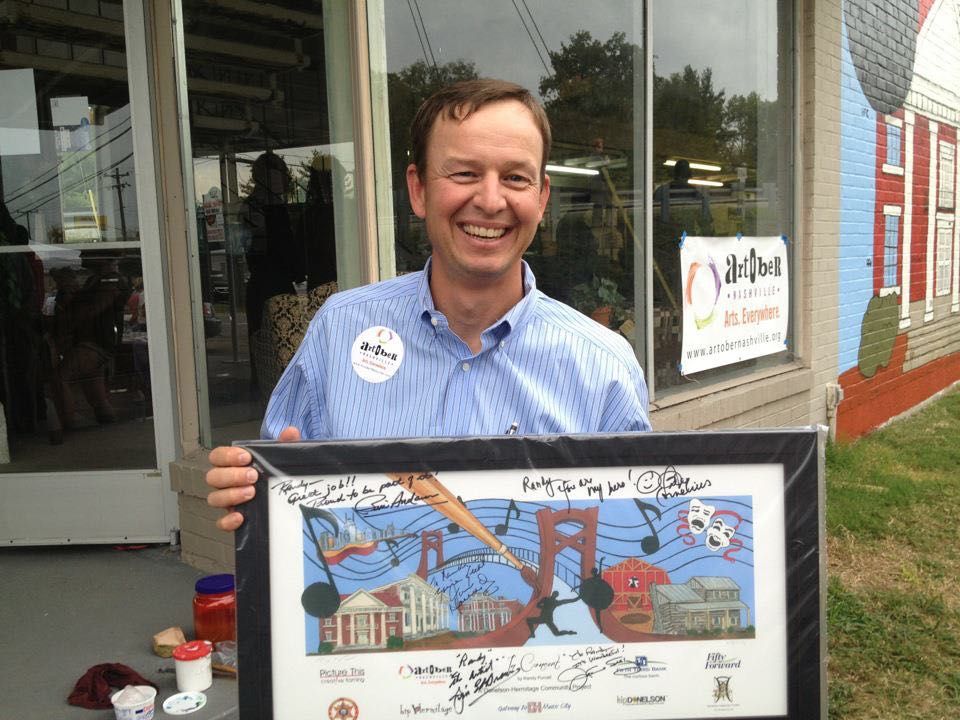 In 2012, Matt helped me organize a public project. We were given permission to paint the exterior wall of an old furniture store that faced traffic along a main thoroughfare.

Because the wall was so large, I came up with the idea to break the mural up into a grid, with each square being 3’ x 3’ in size. I drew my composition on the wall and then asked members of the community to come out and paint one square.

The results were nothing short of amazing! Nearly 200 people participated in this mural project, which took about two months to complete!

The mural was entitled “In Concert,” and depicts how many people can come together for a common goal. This piece of public, communal art became the kickoff site for “Artober,” a citywide arts event put together by the Metro Nashville Arts Commission. The proceedings of this kickoff event included a commencement from Nashville’s then-Mayor Karl Dean.

I am proud to report that even after the furniture store closed, a local favorite, Party Fowl restaurant is now at this location and the “In Concert” mural is still proudly displayed.

2013 Was a year where I took some time to work with the Dance Theater of Tennessee. Me and artist, Ken Walls, designed and built the set props for many of the productions. Those included Nutcracker, Cinderella, and Hansel and Gretel.

I also was contacted by Soho Myriad, a design company that arranged for all the artwork included in the Nashville Omni Hotel. They reproduced seven of my paintings to be hung throughout the hotel.

In 2014, I was blessed to have two professional organizations commission my work.

The first commission was initiated by the National Association of State Boards of Accountancy (NASBA), the organization that regulations accounting practices throughout the U.S. They commissioned three Nashville-themed paintings from me that are part of the organization’s private collection.

The second commission was made by the North American Neuroendocrine Tumor Society (NANETS), a 501(c)3 nonprofit medical society. NANETS held a global conference at the Music City Center for physicians who treat neuroendocrine tumors. I was hired to create 60 smaller paintings that would serve as gifts for the doctors who gave presentations at the conference.

It was 2015 when my paintings really got noticed by people outside of Middle Tennessee. I was featured in “Flying Solo,” an exhibition displayed at Nashville’s International Airport. Fifteen of my paintings hung in Concourse C for three months, engaging travelers visiting from all over the world.

Because of the prominence of my “Flying Solo” work, I received numerous emails from travelers informing me how much they enjoyed spending time with my paintings while awaiting their flights. I ended up selling about half of those pieces during that exhibition. 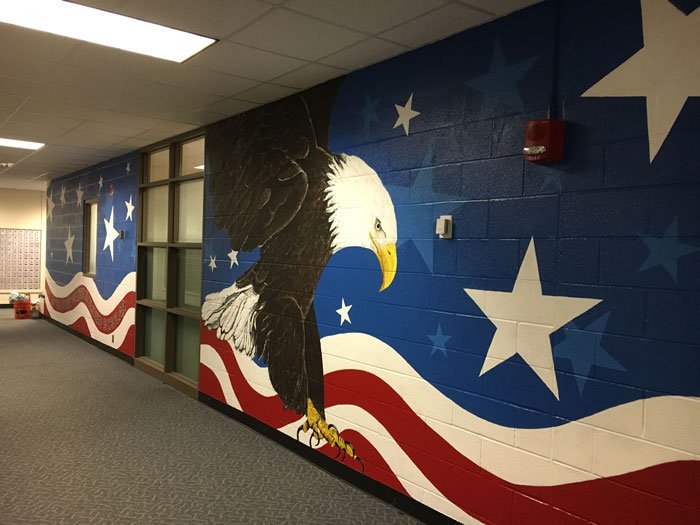 In 2016, I was given a chance for yet another mural project, and another public art piece. The mural would be located at the MTSU Charlie and Hazel Daniels Veterans and Military Family Center. Being a veteran myself—and an alum of MTSU—I felt that it was a great honor.

The public art piece was a bicycle design I created for Metro Nashville Arts Commission. My design was fabricated and placed at Hadley Park beside the community center. 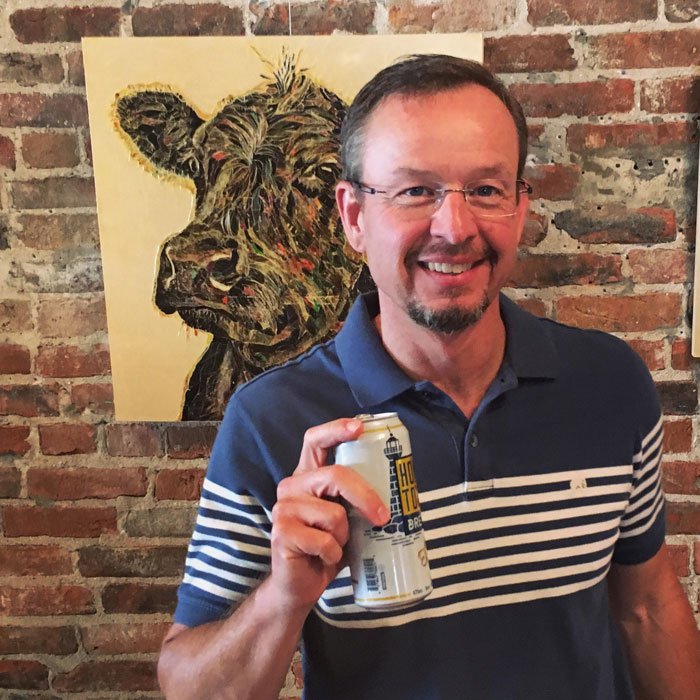 My first art exhibit outside the United States came in 2017. I was connected with a gallery in Port Dover, Ontario, Canada, where I was given a solo exhibit at the Art Gallery at Lighthouse Festival Theatre.

A Year Of Commissions

In 2018, I participated in the University School of Nashville’s “Artclectic” fundraiser exhibit for the second time. I also exhibited in my second “Harding Art Show.” In retrospect, 2018 was also one of my busiest years for commissioned art pieces.

Off The Wall Concept 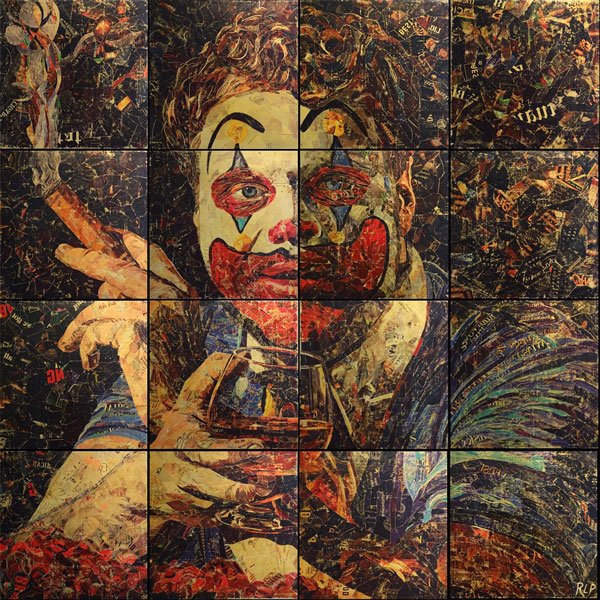 By 2019, I was feeling the itch to create something memorable. After learning of the citywide festival “ArtFields” held in Lake City, South Carolina, I submitted an off-the-wall concept.

At this point in my career, I had been working in my medium for a decade. I wanted to push my limits, so I decided to create something imposing and unexpected. I submitted an idea for a six-foot painting of a clown smoking a cigar and holding a snifter of bourbon. This painting was entitled “Clown Off The Clock.”

While the painting didn’t get as much attention as I had hoped, it did eventually lead to my largest sale to date.

The Year Everything Stopped 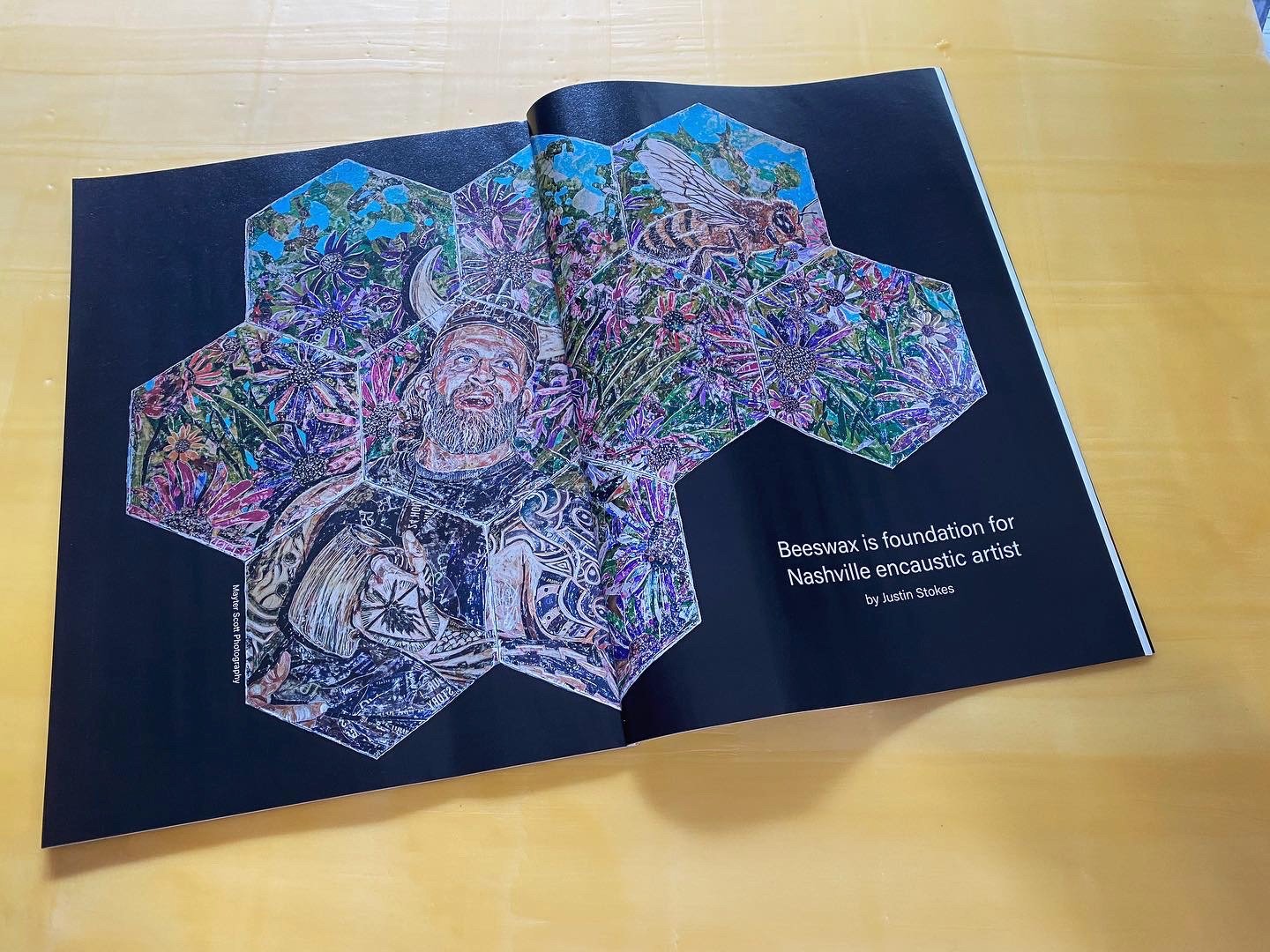 Of course, 2020 was the year everything stopped for artists. Even though I had big plans, Covid disrupted everything.

Yet, in spite of the pandemic, it ended up being an amazing year. First, I was featured on Nashville Public Television’s show “Tennessee Crossroads.” This was an honor, as it introduced my work to a whole new audience.

I was also featured in the “American Bee Journal.” Again, I was introduced to a whole new audience.

Through the wonders of technology, I was able to offer online workshops to those who sheltered in place. This idea came to me after an in-person workshop was canceled. Offering workshop attendees a “pay what you can” fee, I sent out a small kit of materials so that they could create two small paintings at home. One of the two paintings made by each student was mailed back to me. These paintings were put on display at a local gallery, Picture This. In the future, I plan on exhibiting these pieces again as part of a larger showcase. 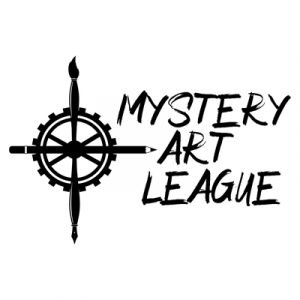 Since 2020 was the year of trying new things, I also dedicated some time to work on another project, “The Mystery Art League” (MAL). Equal parts collaborative art show, experimental narrative, and scavenger hunt, MAL is a business concept that combines my love for creation, avant-garde storytelling, and audience engagement. This business idea is still in its early stages, but more campaigns are on the horizon. 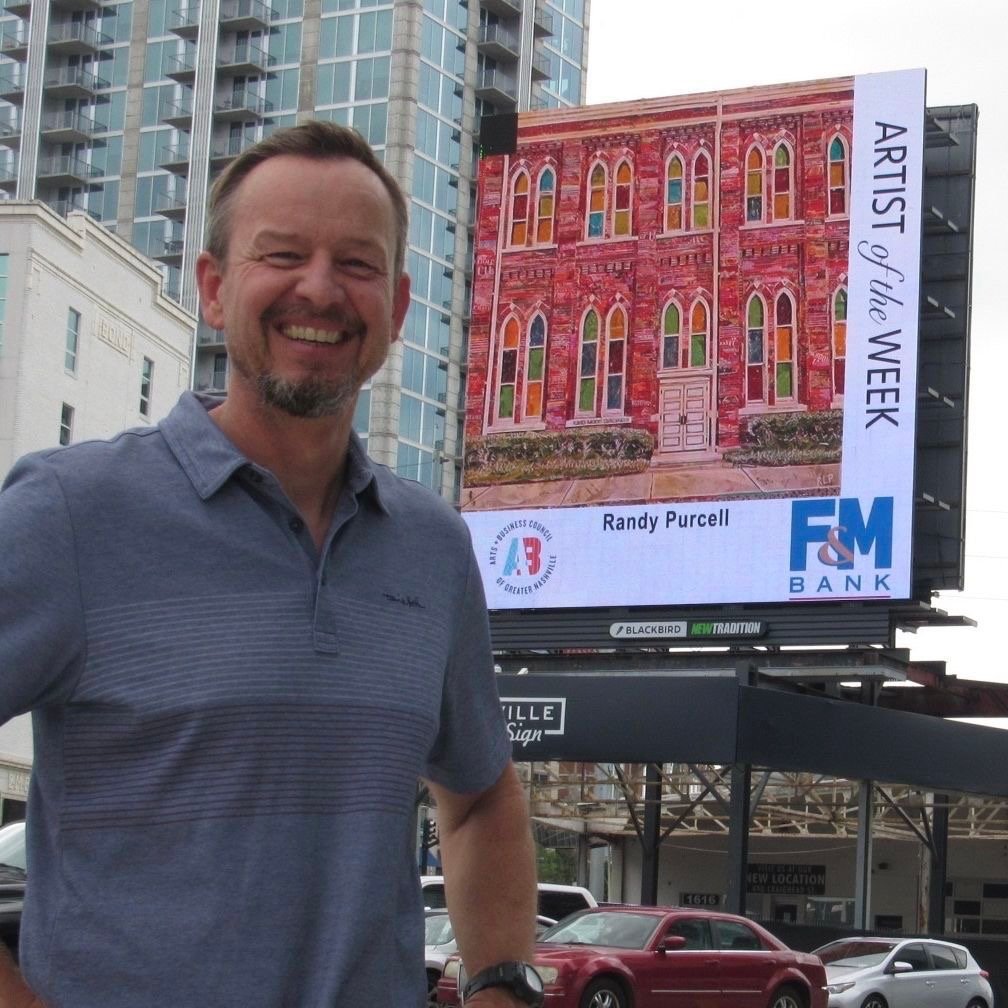 In 2021, I had two amazing opportunities. First, I was featured in an article by the daily newspaper The Tennessean. And second, I was featured on the Nashville Sign as Artist of the week.

In 2022, MAL had its first public show at Two Rivers Mansion, in Donelson. It was entitled “Broken Hearts and Stolen Treasures: The Story of Kricket Kinslow.” This show successfully introduced the MAL concept to the general public.

In addition, I finally got to exhibit my “Art of Science” painting which was started in 2020. The exhibit was delayed because of the pandemic. This exhibit was held at Crosstown Concourse in Memphis, TN. In Knoxville, Tennessee, I had an exhibit with Four Artist TN at the Emporium Art Center, and in the Nashville area I’ve exhibited at University School of Nashville in “Artclectic.”

Stay tuned for exciting things coming up for 2023. I’ll be sharing these events on my blog page, social media, and my newsletter.